Mrittunjoy’s forays into the world of science began in his school days at Montfort School, Delhi. Mrittunjoy represented the Delhi state at the 14th and 15th National Children’s Science Congress in Sikkim and Maharashtra respectively.

His project of using woodlice as indicator organisms for a certain nutrient imbalance in the soil was selected as one of the top two projects among more than 600 projects from across the country in the 15h National Children’s Science Congress, and he represented the Republic of India at the First ASEAN Youth Science Summit in Manila, Philippines.

The delegates from the ASEAN countries and the Dialogue Partner Countries (India and China) met at the Trader’s Hotel, Roxas Boulevard, Pasay City, Manila. Mrittunjoy prepared a paper on GM Food: Prospects and Problems in India, focussing on the economics of GM Food in India and the SEA countries, besides various ethical, medical and environmental factors involved.

In high school, Mrittunjoy came to be associated with a group of students who were very eager and enthusiastic about the sciences, in general, and Physics, in particularly. He fondly remembers the sprint to the library for the monthly edition of Scientific American with his friend Chetan (Chauhan).

He participated and won laurels for his school in a number of inter-school, district, state, national and international competitions in the domain of science and technology, in those early, formative years.

Stephanian Days and the Summers

Entering St. Stephen’s College, one of the most prestigious institutions of higher education in India, Mrittunjoy came into contact with teachers and students from all across the country. He talks of one professor particularly in good light – Prof. Vikram Vyas, describing him as one of the greatest motivators in his path of pursuing Physics. He presented his first semester project (for his paper in Mechanics) on Analysis of Orbital Resonance, Kozai Mechanism and Multiple Star Systems using V-Python. This was the first time when he came to be acquainted to an interesting problem in cosmology and astrophysics for research.

The first summer vacation was a period of boom in terms of activities and research for Mrittunjoy. He had two summer projects and a summer school. The former two were in the field of Condensed Matter Physics, while the latter was the prestigious National Initiative on Undergraduate Science (NIUS) in the Tata Institute of Fundamental Research (TIFR). The projects were in the University Science Instrumentation Center in Delhi University and the latter was in the Indian Institute of Technology, Guwahati. He worked on the project “Stress-Coupled Magnetoelectric Effect in BaTiO3-CoFe2O4 Composites” under Dr. Kondepudy Sreenivasan at the University Science Instrumentation Center, University of Delhi from 18 May 2012 to 14 June 2012. The project largely related to the analysis of the stress coupling and the resultant strain developed by Raman Spectroscopy besides the study of Magnetic Properties (mainly using a Vibrating Sample Magnetometer) of the composites with varied proportion of components. Later in the same summer, he worked on Magneto-Caloric Effect and Magnetic Field Induced Strain in Heusler Alloys under Dr. Ananthakrishnan Srinivasan at the Department of Physics, Indian Institute of Technology, Guwahati from 5 July 2012 to 20 July 2012. The project was to study the characteristic properties of Heusler Alloys using instruments such as a Differential Scanning Calorimeter and High Temperature VSM. You can have a look at one of the papers on the same here.

Between the projects, he also attended the NIUS camp. Mrittunjoy talks fondly of his time in TIFR. The camp comprised of lectures on topics such as Quantum Mechanics (topics such as Quantum Computation, Dynamical Systems, etc.), Particle Physics (topics such as Spontaneous Symmetry Breaking, Relic Abundance of Dark Matter, etc.) and Astronomy (topics like Astero-seismology, etc.) by renowned resource-persons such as Padma-Shri Dr. Arvind Kumar, Dr. D.P. Roy and Dr. Prashanta Panigrahi, and experimental physics lab sessions. He was selected for the project “Geometric Measure of Entangled States and their Applications” under Dr. Prasanta Panigrahi of IISER-K. The selection was on the basis of the NIUS test in the Quantum Physics test organized in Physics Camp (9.1) 2012. The topic and this project was his primary preference, and played an important part in driving his interest in the world of Quantum Physics and Quantum Computation (topics he will later pursue in his PhD at Cambridge).

In St. Stephen’s College, he was a part of various societies and founded the group called Enthusiastic Physicists in Conversation (EPIC), a group that briefly had branches in Cambridge and Copenhagen as well. He was president of the Electronics Society and the Computer Society in his third year and chief organizer of the National Science Fest, the flagship fest of the college for the sciences. Events such as Orfik and Trivia(l) X-Centricity are still organized till this day in the college: a legacy he left behind. 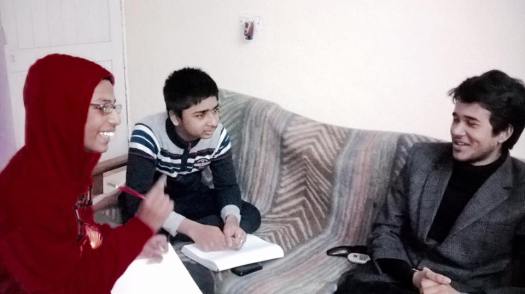 Besides being involved in science popularization with the aforementioned forum (EPIC), he has been actively involved in this field in collaboration with the Department of Science and Technology, Government of India. He has addressed school students in villages in Assam and Delhi for this purpose, and believes that media-centric content and innovative way of presenting science can go a long way in promoting the spirit of science in the country and the world over. He also began a science blog called Chrience for Christ’s College, during his time as the MCR Academic Officer, and has been the Secretary of BlueSci, the Science Magazine of Cambridge University.

As part of governmental bodies such as the Department of Science and Technology (Government of India), think tanks such as the Cambridge University Science Policy and Exchange (CUSPE) and non-governmental organizations such as Vigyan Bharati, Mrittunjoy has had close interactions with science policy and policy-makers. He takes inspiration from Dr. Julian Huppert, who has been one of the best scientist-politicians in recent times and with whom Mrittunjoy shares a good friendship. As part of CUSPE, he has come in contact with major fora and organizations such as the Westminster Forum, Center for Science and Policy (CSaP) and Cambridge Food Security Forum (CamFSF).

Cavendish Laboratory and Beyond

In 2014, he was selected among around 15 students from all over the world to pursue the Master of Advanced Studies (MASt) course in Cambridge, funded by the Nehru Trust and Christ’s College, Cambridge. He got a first in his majors and went on to secure a PhD position in Prof. Crispin Barnes’ group at Cavendish Laboratory. This time not only was he Nehru Trust scholar but also a Trinity Barlow Scholar, selected by Trinity College from a field spanning all fields and colleges of Cambridge, and a Hitachi CASE grant. He fondly remembers his time being a student of Prof. Malcolm Perry, guide to stalwarts like Dr. David Tong, for Quantum Field Theory and his interactions with luminaries like Prof. Wolfgang Ketterle, Prof. Peter Higgs and Prof. Venkatraman during his student life.

In Cambridge, two of his major research projects have been focused on ‘The Quantum Theory of Fluids’ and ‘Quantum Entanglement and Symmetries’. The former was done under Prof. Ben Gripaios (DAMTP and HEP-Cavendish Laboratory) and the latter under Prof. Crispin Barnes (Cavendish Laboratory) as part of his doctoral research. He has found an interesting link between symmetries of qubits and entanglement, besides extensively looking at ways to characterise entanglement. This also feeds into his interest in how entanglement feeds into the concept of emergence of spacetime and gravity.